Your silence hurts me, wrote the renowned Palestinian poet Mahmoud Darwish. The Zapatistas of Chiapas, despite facing their own considerable difficulties, have not been silent on the ongoing carnage in Gaza.

At the recent First Exchange of Indigenous Peoples in Mexico with the Zapatista Peoples meeting held in Chiapas, Comandante Tacho of the EZLN expressed solidarity between indigenous liberation movements in Mexico and Palestine. Addressing hundreds of delegates at the indigenous conference, Tacho condemned Israel’s “war of extermination” against the Palestinian people in Gaza. and said the Zapatistas “embrace the [Palestinian people] today as we have before, as we always do.” 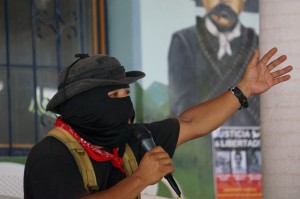 Subcommander Insurgent Moises makes a point during meeting with the Sixth Campaign and alternative media in La Realidad during Aug. 2014.

Marcos continued “We Zapatistas from the EZLN, know how important it is, in the middle of destruction and death, to hear some words of encouragement….[W]ords from afar might not stop a bomb, but it’s as if a crack were opened in the black room of death and a tiny ray of light slips in.

…So, even though global protests won’t turn into an armored shield so that a 5.56 mm or 9 mm caliber bullet with the letters ‘IMI’ or ‘Israeli Military Industry’ etched into the base of the cartridge won’t hit the chest of a girl or boy, but perhaps our word can manage to join forces with others in Mexico and the world, and perhaps first it’s heard as a murmur, then out loud, and then a scream that they hear in Gaza.”

During the August 10 press conference in La Realidad, held by Subcomandantes Moises and Galeano, Galeano reflected upon how the mainstream media distorts events, in such a way that a massacre of Palestinian civilians becomes a confrontation between Hamas and the Israeli army, and is actually the fault of the Palestinians. The manipulation of the media imposes, according to Galeano, “an inhumane and absurd logic.” 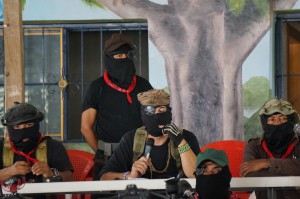 Solidarity swings both ways. During the recent attack on Zapatista communities, leading to the murder of the teacher Galeano, a group of prominent Palestinians sent out a message of support from the occupied territories, referring to the “nakba (catastrophe) in Chiapas.”

Here is an excerpt of Comandante Tacho’s message spoken on August 3, 2014. The full message can be read here. 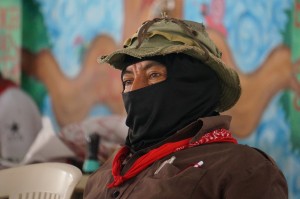 Zapatista leader Commander Tacho in La Realidad during meeting with representatives of the Sixth Campaign and alternative media during Aug. 2014.

“Compañeros and compañeras of the National Indigenous Congress:

We come to share our suffering and pain caused by the Neoliberal system.

But not only this.

We also come to share valuable knowledge, our experiences in struggle and organization, and our goals and challenges.

We do so in the face of the neoliberal capitalist invaders that have done us so much damage.

These invaders were not satisfied with the theft and looting carried out by the conquistadors in 1492.

Those conquistadors encountered the resistance of the peoples, tribes, and indigenous nations of these lands of this country called Mexico.

They killed those who opposed subordination to the Spanish monarchy.

These wicked invading tormentors stained their hands with indigenous blood and stole the richness cared for by our oldest ancestors.

They persecuted the Indian peoples of Mexico and all of Latin America with the goal of eliminating the indigenous peoples completely and banishing their existence.

They did not achieve this. That we are here now is proof.

However, communication from the communities of our ancestors was lost; the relations of these communities were lost.

But the wisdom and intelligence of our oldest grandparents was hidden from the Spanish invasion.

And with that the indigenous peoples remade their existence.

We grew, forgotten by the powerful, for 500 years in all of the corners of our Mexican homeland.

We as originary peoples were ignored, deceived, forgotten, exploited, and enslaved in their dominion for more than 500 years.

And now, through the rise of the neoliberal powers, the machine of destruction appears once again to disappear our peoples.

They have made it bigger and more modern, supported by laws and bad governments, in order to invade us once again.

It has a new plan of dispossession, dispossessing us of our mother earth using the machinery of the power of money, looting the riches that mother earth has held and kept safe for millions of years.

With this machine comes the death and destruction of our peoples and our mother earth.

But as the indigenous people that we are, we know that what is happening there is not a “conflict” but a MASSACRE, that the government of Israel is carrying out a war of extermination upon the PALESTINIAN people. Everything else is just words to try to hide reality.

But we also know, as the indigenous people that we are, that the PALESTINIAN people will resist and will rise again, that they will once again begin to walk and that they will known then that, although we are far away on the map, the Zapatista peoples embrace them today as we have before, as we always do, with our collective heart.

And here on our map, the power of money’s machine of war of is without a brain, without memory, wicked, like a savage animal unleashed against our indigenous peoples of Mexico.

They do not care about the destruction and death of our entire peoples, tribes, and nations.

We as the indigenous peoples of Mexico are not protected by laws and by bad governments.

Our hope lies only in ourselves.

No one is going to come save us; absolutely no one will fight for us.

Not political parties, nor politicians, nor laws; there is nothing there for us.

Compañeras and compañeros. The political parties, laws, and bad governments have demonstrated this clearly.” 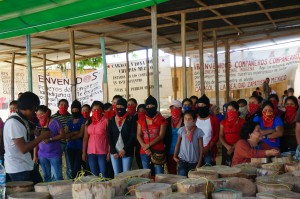 Zapatistas attending the meeting of the Sixth Campaign and alternative media meeting in La Realidad during Aug. 2014.

[All photos by Peter Brown]

For further reading around the shared struggle and common cause of the Zapatista and Palestinian communities in resistance, read these articles in the Schools For Chiapas Library: