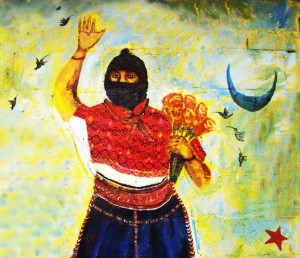 Along with a few outsiders and many indigenous Zapatistas, I had the opportunity and the honor to attend the burial and contemplate the human issues that always arise when one is confronted with the finality and continuality of death.  Throughout that sunny morning and brilliant afternoon, a tumult of emotions and thoughts and impressions flashed across my consciousness and are still percolating beneath the surface.  Although I am still sorting out my feeling, I need to share some impressions from that profound experience.

How to begin?  How can I explain the impact of Ramona?  Why did this tiny Tzotzil woman make a difference in my life; why did she make a difference in the world; why did I sit on that hillside near the graveyard of San Andres Sacamch’en de los Pobres all day during her funeral?  What does the future hold for men and women like Ramona who want to save our planet from the many horrors of our times?

Certainly a part of Ramona’s impact and legacy lives in the form of images.

Of course there’s the 1996 image of tiny Ramona on the verge of death leaning on the arm of the Sub Commandante Marcos as she leaves the Zapatista capital of La Realidad -breaking the deadly military siege of the Zapatistas and traveling on to conquer the Mexican capital.  At that moment Marcos described her as the most militant and dangerous weapon held by the Zapatistas; in the capital she received a liver transplant and captured the hearts of millions of Mexicans.

Then there’s a delightful photo from the summer of 2005 (that might be on our web page, no web access here) of my friend Diccie smiling and pointing up at a sign in Pulho of a women’s cooperative named after Ramona.  Diccie asked, “What is Commandanta Ramona?”  At the least, Ramona was someone for whom indigenous woman named their organizations.

There’s the simple seated photo of Ramona as always wearing her embroidered dress from San Andres Sacamch’en de los Pobres which I took during her 37th birthday party (again, I think it is on our web page) when Schools for Chiapas was launching our very first schools construction team from Mexico city along with the Frente Zapatista.  Artists from the Border Arts Workshop in Tijuana / San Diego used that image to paint Ramona onto the walls of the first autonomous, indigenous secondary school in Chiapas – still by far their most popular image in the mural which still surrounds that educational institution.

Finally there’s that super-famous news photo of Ramona at the beginning of the peace talks in 1994 holding the low end of the Mexican flag while the sup firmly grasps the high end of the flag and the polyester-clad Mexican government representative Camacho struggles to reach for an edge of the flag.  The Mexican government is still struggling to hold onto a piece of the national flag which the Zapatistas captured.

The power still does not know what hit them when they encountered this tiny Tzotzil woman.  But the power certainly knows how to fight back.

Even though I could not access my email the next day, the internet opened up far enough to let me read news / opinion headlines on the Spanish language web page of Microsoft Service Network suggesting that the Zapatistas had suffered a major blow with the death of Ramona BECAUSE “they have now lost their moral compass.”  I was so mad and upset I could hardly sleep that night.

However I doubt there will be public or photographic images to describe (or lie) about Ramona’s funeral.

Although our brothers and sisters of the press anxiously fiddled with their cameras for hours awaiting the arrival of the coffin, the Zapatistas had announced a “No Photos” policy.  And when the final caravan bringing Ramona arrived, a dozen or more energetic young Zapatistas bounded up the photographer’s hill and quietly insisted they put their cameras away.  I hope the Zapatistas were once again successful at choosing the time and place for the outside world to take their photos.

Even in her death Ramona brought together people from around the world. The “Ya Basta!” solidarity organization from Italy recently donated several modern ambulances and it was fitting that the body of Ramona was carried past a delegation from Italy in one of these vehicles which now serve the Zapatista health care system she worked so hard to create.  As the ambulance arrived, dozens of masked Zapatista men and women leaped out of trucks and raced full speed begin the new ambulance toward the humble cemetery where hundreds of community members had previously gathered.

As this powerful and purposeful tide of indigenous people surged past me, I simultaneously realized two things.

The first thing realization was that photos from this grave side were irrelevant; Ramona’s final photographic legacy had actually already occurred.  I felt it in that massive surge of tens of thousands of indigenous, who non-violently took the streets of San Cristobal de las Casas on Jan. 1, 2006 to launch their campaign for the “other” – the others who are forgotten and left out and oppressed..  On this occasion rather than Marcos sending Ramona away, this time Ramona and her many sons and daughters were sending the Sub commander Marcos away to take back the nation.

My most powerful feeling as I was bumped and moved and massaged by the flow of  humanity accompanying Ramona to her final resting, was a sadness and outrage to realize that the power does not want these people to continue burying their dead here in San Andres Sacamch’en.  The Tzotziles are irrelevant and dangerous to international capitalism; their place in the “modern” world is to clean bathrooms and make beds in tourist hotels in San Diego, New York, Portland, Houston, Miami, etc.  Or to wash dishes in Atlanta, to haul lumber and block in Chicago, to pick fruit and cut weeds in the central valley of California…

But as the young and old Zapatistas sat on the hills surrounding the graveyard on day of Ramona’s burial, the sounds of Radio Liberation floated through thousands of dried corn stalks.  As far as the eye could see the doubled over stalks form a mosaic pattern telling of human survival and regeneration.  The lively music and occasional commentary in Spanish or Tzotzil from the rebel radio station also mentioned The Other Campaign and said good bye to Ramona.  On that day the mosaic of corn fields was filled with watermelon-sized squash ready for harvest which last three years or more; and the sun and soil were actively already conspiring against the plans of Bush and company by offering the next crop of beans.

Even as Fox seeks new ways to sell Mexican slaves into the United States, the Tzotziles are living their Ya Basta by growing food and babies which directly contradict the power of greed and violence.  Ramona continues as a part of this cycle of life which will finally defeat the death that capital has envisioned for all of us who make up The Other. 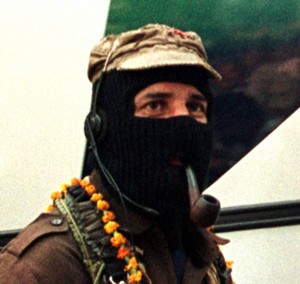 Now it is Ramona who has sent off the Subcommandante to open new pathways for Ramona’s people to meet other rebels in their struggle to save the world.  And today in the highlands of the Mexican southeast the people have stored away mountains of corn and squash and beans to feed the babies and nourish the insurrection.  And perhaps just to provoke the power, the Tzotzils hang the brightly colored corn seed for next year’s crop hangs in fully view on their porches, daring the power to try to snatch away the babies or the corn.

During her life Ramona shone as brightly as that corn seed which decorates the houses of the Tzotziles.

And as surely as the corn from which she was created will be planted in the spring; Ramona will continue to be born in the mountains of the Mexican southeast and everywhere in the world that people struggle for dignity, democracy and justice.

(English language version is above.)