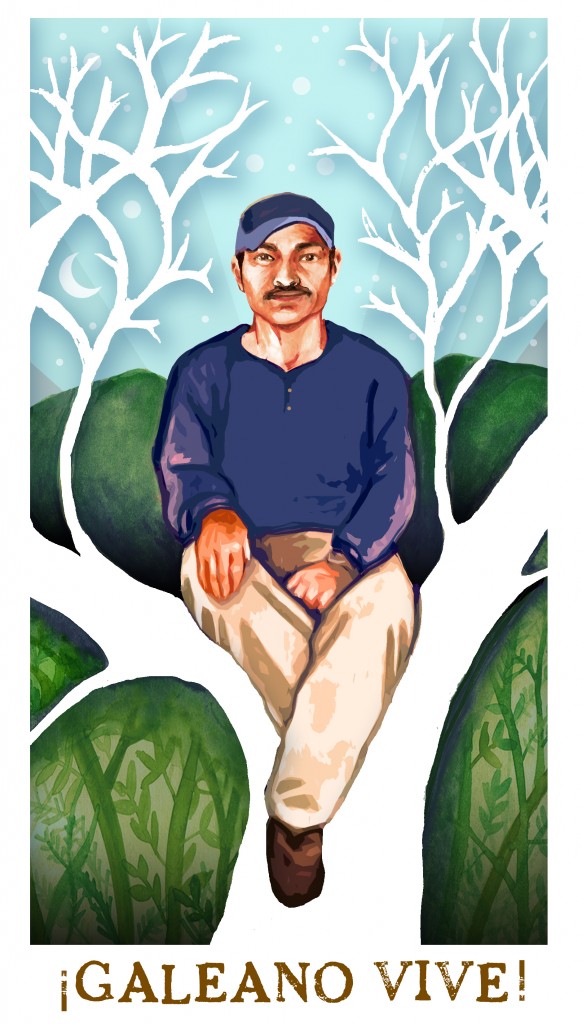 I hear all kinds of arguments about what’s wrong with schools and the sentiments tend to avoid the keys to what’s essential in the creation of a learning environment: an understanding of “who” the person is who’s being educated. And nothing gets at “who” a child, a student, is more than an educator who respects and appreciates that person’s culture and gives him or her an education that’s rich in the arts.

With that being said, on May 2, 2014, a hero of mine, a teacher extraordinaire, Jose Luis Solis Lopez (Galeano), was assassinated at the Zapatista’s “Little School” (La Escuelita), in Chiapas, Mexico. The school was built to celebrate “who” children are and “who” they can become.

Their culture is at the core of their school. The arts, drawing, painting, singing, dancing, poetry are interwoven in all that they do, enabling each child to get at what drives them, what they have to offer, how they fit into the scheme of things.

I didn’t know Galeano but it’s like I’ve lost a brother because we are companions in a movement. Zapatistas at heart. Shortly after Subcomandante Marcos and his freedom fighters, the EZLN (Zapatista Army of National Liberation), armed themselves against the Mexican government’s mistreatment of indigenous people in 1994, a number of us in San Diego went into action.

We put Marcos on stage, in the form of guerrilla theater, via Old Antonio, a character of the ages who is most learned and wise, the soul and conscience of the movement, the teller of the people’s stories and traditions, the sharer to the world of “who” a people are.

And from this came Schools for Chiapas, www.schoolsforchiapas.org, created by my dear friend, Peter Brown, to educate the children of the Lacandonan Jungle. Mayans. The “who.”

And Galeano was a molder of Mayans. It was his hope, as it is the hope of all involved, to nurture children who will appreciate themselves and their history to want to preserve it and use it to make contributions to their communities and their country and their world-at-large. That’s “who” they are meant to be: human beings proud of their architecture, their farming skills, their spectacular art, their connection to the universe …

But evil forces, “who” don’t understand concepts of love, planned and executed a paramilitary attack of unarmed civilians, not only stilling the life of Galeano but also destroying their school and their clinic and ambushing and injuring 15 other people.

Since 1994 the Zapatistas have exposed wretches like these, letting us see how they tirelessly attempt to take away a people’s efforts towards becoming self-determining – while the mainstream media lies, telling us, for instance, that the attack in Chiapas was an intra-community confrontation when we know otherwise. Fox-like News is alive throughout the world.

But through the efforts of loving human beings like Galeano, the children are already learning that another world is possible in the here and now, a world that can make tomorrow ever so promising. If we join them.

That work has to be kept alive. We have to be dignified in our pain and rage against injustices and support struggles for freedom and dignity wherever they might be. If the Mexican government’s aggression against brothers, sisters, teachers-votanes and Zapatista bases of support isn’t stopped we’re all hurt in a sense. “Who” we are becomes irrelevant and our cultures slowly fade away.

As first steps to keeping Jose Luis Solis Lopez, our beloved Galeano, alive there will be a “Day of Homage” for him at Chicano Park on Saturday, May 24, 2014 at 3pm.

I was raised in a loving and alive home, in a black neighborhood filled with colorful characters in Tucson, Arizona. Such an environment gave me a hint that life has to be grabbed by the tail as tight as a pimple on a mosquito’s butt. With no BS and a whole lot of love. So, from those days to now I get up every morning set on making the world a better place. On my good foot*, and I hope my writing reflects that.