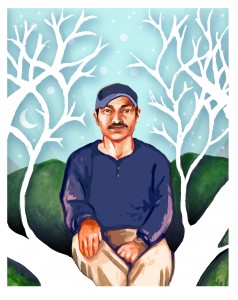 The targeted assassination of a Zapatista teacher known as Galeano in Chiapas, Mexico has shocked and angered people around the world; we at Schools for Chiapas are equally horrified and are seeking to turn our outrage into action by publishing in English an actual educational evaluation made earlier this year by the fallen teacher Jose Luis Solís López (also known simply as Galeano).

Below you will find and English translation of the transcription of a presentation given by Jose Luis Solís López (known as Galeano), the Zapatista promoter/teacher who was killed on May 1, 2014.  This document was originally  recorded as part of a Zapatista evaluation session of La Escuelita (The Little School) and was published in Feb. 2014 in Spanish in the first volume of the new Mexican journal Rebeldia Zapatista.  While defending the local elementary school, Galeano was targeted and assassinated on May 2 in an ambush just outside of the Zapatista Caracol of La Realidad, one of the five seats of the Zapatista Good Government Councils (JBG).   The leadership of several anti-Zapatista organizations including  CIOAC-Histórica, the Green Ecological Party, the National Action Party [PAN], and the Revolutionary Institutional Party [PRI] are all implicated in planning the attack.  Click here for more detailed information about this attack.

To honor our slain compañero Galeano, this brave educator who was murdered while trying to defend the community’s school, we publish our own English translation of his presentation in full.  Click here to read the original Spanish.

Galeano:  “We are a team of teachers participating at various levels in The Little School for Freedom according to the Zapatistas, like in the video conferences. We are all affiliated to the “Mother of the Caracols. Sea of our Dreams” caracol, located in the Frontier Jungle region. I come from the village of Nueva Victoria, in the municipality of San Pedro de Michoacán.

For me, I see La Escuelita as a very important initiative, because it is a means for us to communicate with people from the city, so that we can share our experiences, our great achievements during these 19, almost 20 years of autonomy. So I say it’s a means, a means for us to be able to share the progress we’ve made in building autonomy with people from outside, and a place where they have been able to come into our territories, to stay with indigenous families, to share and to learn. And at the same time, the visitors come to understand how the Zapatistas have their own ways, our own forms of organizing, our own means of self-sufficiency, and how we do not have to rely on the bad system of government, but rather we build our own system.

Now they have seen it with their own eyes and have come to understand the sacrifice we are making in order to attain all that we have achieved. While staying with families in the communities, the visitors have seen how much has been sacrificed, how much this family has endured in order to harvest, in order to provide for the whole family and to sustain us all in our resistance to the bad government. The visitors have seen how much effort it takes to survive and how the bad government makes us pay with this misery.

Now with their own ears and eyes they have seen the things that we have always said. Maybe they had heard our speeches or read our communiques before, but perhaps they did not really believe what we were trying to say. They knew that the Zapatistas were in the mountains, that’s what they always say, but they never thought of us Zapatistas as flesh and blood, that we are human beings like them, and that this is what we do: we are in the communities and we are organizing.

So La Escuelita for me is a means for us to communicate with other people from the city, from our country and the world. It is like a bridge to communicate.

La Escuelita is one more of our accomplishments that we have achieved through our resistance, through our struggle. We can consider this one more of our accomplishments because during these 500 years of being robbed and exploited by the bad system, the bad government never allowed us this kind of space, the bad government never gave us this kind of freedom that we have now to meet and work with people from other parts of our country.

I value La Escuelita because here in our struggle, there are many young people who were born after the uprising, as well as those born in the city who had not been born in 1994, and they had only heard about the Zapatistas in the media, in the newspapers or on the radio, but they never really knew what the struggle was all about. So I think La Escuelita has been a great achievement, because of course the bad government would never have given it to us. No other organization has accomplished what we have done here in organizing La Escuelita.

Not only are people from the city and from other countries being educated through la Escuelita, but we are also educating ourselves, the youth are being prepared to continue the work of governing ourselves. Through opening up the space of La Escuelita, the youth are being guided and orientated towards learning how we govern ourselves, how it is that the people should lead. For me, I value the school as a very important thing. We ourselves learn many things, and people coming from outside learn from us.

The other really great achievement we see here is that the government is no longer in control, here the people are in charge. The people decide for themselves how things are to going to be, and that is what others need to understand. As we have already pointed out, the people from outside who come to attend La Escuelita may have heard that in Zapatista territory the people are in charge and the government obeys, but now they have come to see with their own eyes just how the people here govern from their villages, municipalities and at a district level. That’s the best thing of all, how people from outside have come to understand the Zapatistas process of self-government.

What is our assessment of the students?

I have a great respect for those compañero/as and students who have come to attend La Escuelita. You can see the great spirit here, you can see the importance of the initiative for them; they are very interested in what they have come to learn about. So many compañero/as, intellectuals, school teachers, artists, urban dwellers, collectives, student and university groups, have come here and have told us that they have never experienced anything like what they have experienced in La Escuelita. They seem very pleased.

Furthermore, I respect them because they make a commitment. They say that they will pass on what they have learned here with their compañero/as who for whatever reason were unable to attend; that they will share what we have taught them, what they saw, what they learned. So for this reason, I respect the students who came from outside because I saw that they were very excited by the experience.

While some students were somewhat confused or unsure about what they were meant to be doing in La Escuelita, or they were asking questions that reached beyond what La Escuelita was about, I can say for sure that there were no bad intentions, just that they were feeling disoriented or unsure of themselves, and so they went beyond the boundary we had established. I am sure that they did not mean any harm but it was simply that their concentration was not on La Escuelita.

But the students who came to this caracol were very content and greatly appreciated all they had learned. For this, I applaud them because apart from people who came who had the means to do so, there were others who had to take time out from work, or students who had to save up their money to come learn in our school. I appreciate that they made this effort to get here because they had a desire to learn and were interested in what we are doing.

On a rather more general level, we could see that the students came to learn from us and for me, that was something that I respected a lot. Aside from the questions they asked it became clear from their comments and what they said, that they too are exploited, that they too suffer in a similar manner to us, the indigenous. The most important thing is that they themselves said we share a common enemy, which is neoliberalism, and only united can we defeat it.

We urge you to respond to this blog in the “Comments” box below.