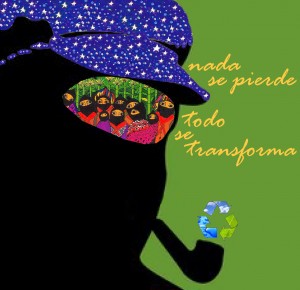 nothing is lost…everything is transformed

Subcomandante Marcos, the spokesman for the Zapatistas (Ejército Zapatista de Liberación Nacional, or EZLN), has announced that his rebel persona no longer exists. He had gone from being a “spokesman to a distraction,” he said last week. His persona, he said, fed an easy and cheap media narrative. It turned a social revolution into a cartoon for the mass media. It allowed the commercial press and the outside world to ignore traditional community leaders and indigenous commanders and wrap a movement around a fictitious personality. His persona, he said, trivialized a movement. And so this persona is no more.

“The entire system, but above all its media, plays the game of creating celebrities who it later destroys if they don’t yield to its designs,” Marcos declared.

The Zapatistas form the most important resistance movement of the last two decades. They are a visible counterweight to the despoiling and rape of the planet and the subjugation of the poor by global capitalism. And they have repeatedly reinvented themselves—as Marcos has now done—to survive. The Zapatistas gave global resistance movements a new language, drawn in part from the indigenous communal Mayan culture, and a new paradigm for action. They understood that corporate capitalism had launched a war against us. They showed us how to fight back. The Zapatistas began by using violence, but they soon abandoned it for the slow, laborious work of building 32 autonomous, self-governing municipalities. Local representatives from Juntas de Buen Gobierno, or Councils of Good Government, which is not recognized by the Mexican government, preside over these independent Zapatista communities. The councils oversee community programs that distribute food, set up clinics and schools and collect taxes. Resources are for those who live in the communities, not for the corporations that come to exploit them. And in this the Zapatistas allow us to see the future, at least a future where we have a chance of surviving.

“This figure was created, and now its creators, the Zapatistas, are destroying it,” the EZLN spokesman said to roughly 1,000 people who turned out for a May 24 memorial in the village of La Realidad for a Zapatista teacher, José Luis Solís López, who was murdered by Mexican paramilitary members. “And we saw that now, the full-size puppet outfit, the character, the hologram, was no longer necessary. Time and time again we planned this, and time and time again we waited for the right moment—the right calendar and geography to show what we really are to those who truly are.”

The May 2 murder of the teacher—known by his nom de guerre as “Galeano”—appears to have been part of a drive by a government-allied paramilitary group, CIOAC-H, to assassinate rural Zapatista leaders and destroy the self-governing Zapatista enclaves. The Fray Bartolome Human Rights Center said that 15 unarmed Zapatista civilians were wounded May 2. Attacks on that day also saw the destruction of a Zapatista clinic, a school and three vehicles.

The Reality Fund: Help rebuild the school and health clinic in La Realidad!

The address last month was the first public appearance by Marcos since 2009. He spoke to the crowd in a downpour in the early hours of May 25. He has been the public face of the Zapatistas since the group emerged as an insurrectionary force Jan. 1, 1994, in Chiapas, the southernmost state of Mexico. Marcos, who is mestizo rather than Mayan, spoke about his rise as a media figure following the uprising and how the movement had catered to the demands for an identifiable leader by a press that distorts reality to fit into its familiar narratives.

Just a few days later [after the uprising], with the blood of our fallen still fresh in the city streets, we realized that those from outside did not see us.

Accustomed to looking at the indigenous from above, they did not raise their eyes to look at us.

Accustomed to seeing us humiliated, their heart did not understand our dignified rebellion.

Their eyes were fixed on the only mestizo they saw with a balaclava, that is to say, one they did not look at.

Our bosses told us then:

“They only see their own smallness, let’s make someone as small as them, so they may see him and through him they may see us.”

A complex maneuver of distraction began then, a terrible and marvelous magic trick, a malicious play of the indigenous heart that we are, the indigenous knowledge challenging modernity in one of its bastions: the media.

The character called “Marcos” started then to be built.

The clandestine movement began, like all rebellions, with a handful of idealists.

“When the first group arrived in 1983, 1984, we were in the densest part of the jungle,” Marcos said in “Remembering Ten Years of Zapatismo,” a documentary produced by the Chiapas Independent Media Center and Free Speech Radio News. “We are talking about a group of four or five, six people that repeated to themselves every day ‘this is the right thing to do,’ ‘the right thing to do.’ There was nothing in the world telling us this was the right thing to do. We were dreaming that someday all of this would be worth something.”

Early Jan. 1, 1994, armed rebels took over five major towns in Chiapas. It was the day the North American Free Trade Agreement (NAFTA) came into effect. The EZLN announced that it no longer recognized the legitimacy of the Mexican government. It denounced NAFTA as a new vehicle to widen the inequality between the poor and the rich, showing an understanding of free trade agreements that many in the United States lacked. It said it had resorted to violence because peaceful means of protest had failed. The Mexican government, alarmed and surprised, sent several thousand members of the military and police to Chiapas to crush the uprising. The military handed out food to the impoverished peasants. It also detained scores of men. Many were tortured. Some were killed. There were 12 days of heavy fighting in which about 200 people died. By February the Zapatistas, who had hoped to ignite a nationwide revolution and who were reeling under the military assault, agreed to negotiate. Most had retreated into the surrounding jungle. The insurgency, Marcos said, faced a fundamental existential choice. He spoke about this choice at last month’s memorial to his assassinated comrade:

Should we prepare those who come after us for the path of death?

Should we develop more and better soldiers?

Invest our efforts in improving our battered war machine?

Simulate dialogues and a disposition toward peace while preparing new attacks?Kill or die as the only destiny?

Or should we reconstruct the path of life, that which those from above had broken and continue breaking?

… Should we have adorned with our blood the path that others have charted to Power, or should we have turned our heart and gaze toward who we are, toward those who are what we are—that is, the indigenous people, guardians of the earth and of memory?

Nobody listened then, but in the first babblings that were our words we made note that our dilemma was not between negotiating and fighting, but between dying and living.

And rather than dedicating ourselves to training guerrillas, soldiers, and squadrons, we developed education and health promoters, who went about building the foundations of autonomy that today amaze the world.

Instead of constructing barracks, improving our weapons, and building walls and trenches, we built schools, hospitals and health centers; improving our living conditions.

Instead of fighting for a place in the Parthenon of individualized deaths of those from below, we chose to construct life.

All this in the midst of a war that was no less lethal because it was silent.

The movement’s shift from violence to nonviolent civil disobedience was evidenced during the memorial. Zapatista leaders said they knew the identities of the vigilantes who had carried out the attacks. But those in the crowd were cautioned not to turn their vengeance against the killers, who, they were told, had been manipulated to murder in the service of the state. The focus had to remain on dismantling the system of global capitalism itself. The shift from violence to nonviolence, one also adopted half a world away by the African National Congress (ANC), is what has given the Zapatistas their resiliency and strength. Marcos stressed this point:

Small justice looks so much like revenge. Small justice is what distributes impunity; as it punishes one, it absolves others.

What we want, what we fight for, does not end with finding Galeano’s murderers and seeing that they receive their punishment (make no mistake this is what will happen).

The patient and obstinate search seeks truth, not the relief of resignation.

True justice has to do with the buried compañero Galeano.

This transformation by the EZLN, chronicled in some astute reporting by the Mexican novelist Alejandro Reyes, is one that is crucial to remember as we search for mechanisms to sever ourselves from the corporate state and build self-governing communities. The goal is not to destroy but to transform. And this is why violence is counterproductive. We too must work to create a radical shift in consciousness. And this will take time, drawing larger and larger numbers of people into acts of civil disobedience. We too must work to make citizens aware of the mechanisms of power. An adherence to nonviolence will not save us from the violence of the state and the state’s hired goons and vigilantes. But nonviolence makes conversion, even among our oppressors, possible. And it is conversion that is our goal. As Marcos said:

Maybe it’s true. Maybe we were wrong in choosing to cultivate life instead of worshipping death.

We made the choice while looking and listening inward, as the collective Votán that we are.

We chose rebellion, that is to say, life.

The Reality Fund: Help rebuild the school and health clinic in La Realidad!