Zapatista children living in a remote Mayan community of Chiapas, Mexico are now attending classes in their new school after a ribbon-cutting and traditional ceremony attended by a Schools for Chiapas team and other visitors.

The new autonomous school is called “Escuela Autonoma Companera Manuel” and is located in the community of La Revolucion.  The massive concrete and wood school structure was built by members of the Zapatista community known as La Revolucion and was funded by donors through Schools for Chiapas.

There are many more communities who still need classrooms.  Click here for more information on donating to help build a school in another Zapatista community.

The Schools for Chiapas team, accompanied by members of regional Zapatista leadership, hiked down a steep, green mountainside, stopping frequently to catch our breath and eat wild guavas from trees on the side of the dirt path.  Several of the leadership were actually members of the community who make that trek daily in order to get to work, get supplies, or care for the animals grazing in the fields.

When we arrived in the community, we were greeted by excited school-aged kids and family members in front of the community’s church. A wonderful lunch of locally-grown chicken soup, fresh corn tortillas, salsa, and lemonade was served to us before the true festivities began. The food was amazing.

The ceremony began in the church, Iglesia San Jose, where elders and lay-priests gave welcoming speeches and thanking Schools for Chiapas for our donations.  Immediately after these speeches a parade began featuring celebratory fireworks rockets, a local band played with hundreds of community members walking up the hill towards the new school.

Located in a verdant valley, the new school building had two doors sealed with crossed white ribbons and decorated with flowers.   First the indigenous leadership cut one set of ribbons and cleansed the opening with incense-smoke.  Then Schools for Chiapas representatives cut other ribbon and the crowd flowed into the new building with parents sitting around all the walls. 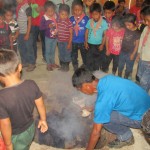 in the middle of the concrete floor while the band played lively music. The priest and other distinguished members of the community circled the hole and began praying for their new school.  To dedicate the school traditional sacrificial ceremony involved placing the head and legs of a large cow into the hole along with corn, blood, incense, and other traditional sacrificial items. Kids watched the ceremony with rapt attention.

Finally, the hole in the center of the classroom was filled and candles lit on top. The Zapatista band played the Zapatista Hymn while people sang along and then everyone joyfully joined in a traditional dance.

After moving to a small plaza, the elementary school students presented poems and dances specially prepared for the celebration.  As the entire community watched, listened, and laughed; children wearing several forms of traditional dress danced in pairs and others recited poems with powerful messages about autonomy, the Zapatista struggle, and their people’s history.

After the performances, the visitors shared an amazing meal with all of the children of the community.  It was prepared and served by the community’s women who had been cooking all through the afternoon. Long tables were lined with large bowls of beef stew, spicy salsa, stacks of fresh corn tortillas, and sweet drinks.

Zapatista authorities and the Schools for Chiapas team was served first followed by the grade school students.  Happy kids enjoyed the soup while mothers wearing traditional dress helped the younger ones manage their messy meal. We finished the day by watching an exciting game soccer game between a team of non-Zapatista ranchers and the strongest young men of La Revolution. of Zapatista soccer before

As increasingly dark clouds moved down the massive valley, we thought it would be best to hike back up the mountainside before the rain came.  We said our goodbyes and were thanked once again by many community members for the gift of the new primary school. 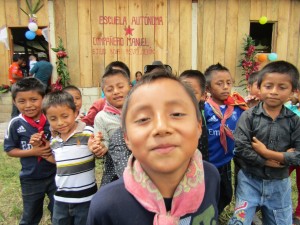 Our hope now is that some of you reading this description will be moved to donate toward the next new Zapatista school construction.  Through donations to Schools to Chiapas, you insure that more of these unique, Mayan school are built.  Perhaps you could even join us for the next dedication celebration.

Don’t just give a gift, give a Gift of Change for building a new and better world.  www.schoolsforchiapas.org/gifts-of-change/