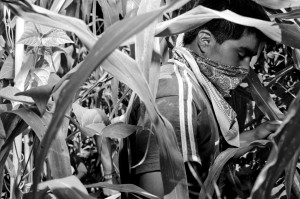 Is it really possible that anyone would consciously plan the murder of a teacher and the destruction of a Zapatista school, health clinic, and water system? How can it be that politicians, governments, or special interests are still attacking tiny Mayan communities after these communities have spent twenty years peacefully focused on education, health, ecological agriculture, and women’s empowerment? And finally, why isn’t the “official story” – a tale of simple inter-community conflicts – credible in the case of the assination of the teacher Galeano and the distruction of La Realidad’s school, health clinic, and water system. During this week of demanding Justice for Galeano and an end to the war against the Zapatistas, we will publish several blogs to answer some of these questions that we keep hearing from many of you who have supported the work of Schools for Chiapas. We begin with this excellent essay by Peter Rosset which was published in Spanish in the Mexican daily La Jornada and translated into English by Schools for Chiapas. Your comments are welcome below.

To better understand anti-Zapatista violence in Chiapas. A brief guide.

Are Indians just violent people, or what? Are the Zapatistas violent?  There is a heck of a lot of confusion surrounding violence in Chiapas.  To help clear up misunderstandings about what is going on, I offer this brief guide to better understanding.

The counterinsurgency strategy in Chiapas is based, in part, on the implementation of policies designed to fragment peasant, community and indigenous organizations, creating ever smaller, more polarized, more aggressive, more opportunistic and easier to manipulate factions. Local and regional leaders are bought off with handouts and money for productive projects, with candidacies, cushy government jobs, etc., responding both to the objective needs of their followers, as well as to their opportunism, envy and grudges.

These offers either explicitly or implicitly hinge on distancing their organizations from Zapatismo. The first goal is to politically isolate the rebels. These resources and jobs are then also used to provoke open conflict, with or without violence, against Zapatista supporters (called ” support bases”) and communities. Local problems and disputes, many times preexisting, are used to stimulate violence, even though the issues at hand may be completely unrelated to Zapatismo itself. These are the kind of conflicts that are commonplace, even “normal”, in all rural societies, both in and outside of Chiapas.

Among these common problems are disputes over property lines between adjacent landholdings, especially in contexts where one group wants to title the land and the other doesn’t; access or control over local resources, such as water, timber trees, land suitable for development, and sandbanks and gravel quarries; family and religious differences; political party affiliations; competition for government projects and handouts; disputes over representation viz a viz the State; as well as greed, resentment, grudges and jealousies going back in time. Manipulation by the State can take almost any latent, preexisting difference, and transform it into an open conflict.

Still, it would be a mistake to see the State as monolithic. There are factions in the State that look to encourage violence by any means possible, but there are also forces trying to temper the violence, so as to not scare away investors and tourists. This means that on one side, anti-Zapatista violence is promoted through “rewards” (projects, government posts, candidacies), and on the other side, a “resolution” is sought, to calm each conflict. A given peasant group may be rewarded with resources by one arm of the State for the attack, and then given another reward for stopping the attack, by the other arm. Then they must wait a decent interval before they can attack again, to get more rewards.  As result it seems that these local factions rotate, taking turns doing their job of attacking the Zapatistas.

It should be no surprise that violence directed at the Zapatistas gets misleading coverage in the mainstream media, tainted as it is by racism and classism.  Instead of being presented as attacks and aggression, it is portrayed as “local conflicts,” or “dust-ups between peasants,” that come about because “Indians are inherently violent,” and “poor people just go around killing each other”. This messaging is used as a justification so the “forces of order” can act against the Zapatista support bases.

Often national farmer organizations deny ties to what apparently are their local affiliates, when these commit violent acts. This can happen precisely because, as a result of the overall strategy, these local groups who belong to the national organizations, are constantly forming, dividing, re-combining and merging in new combinations, all with astonishing quickness.  Many times national leaders aren’t even aware of the day-to-day reconfiguration of their bases. But the decision to draw a dividing line between themselves and their old members doesn’t mean that those people didn’t once belong to the national organization, and couldn’t once again in the future. Sometimes the explanation given by national leaders is but a pretext; while other times they may quite simply be ignorant of what is going on with their bases.

Counterinsurgency in Chiapas takes advantage of local conflicts as a central part of its strategy. These preexisting local problems are like trees, while the counterinsurgency policy is the forest. Both must be seen simultaneously. It is important to understand, and not forget, that the forest is built, precisely, from all the trees.

Finally, there is one additional element that should be taken into account. In the disputed territories of Chiapas, there are two predominant visions. One, the Zapatista vision, is centered on the gradual construction of territorial, indigenous, and peasant autonomy, on autonomous education, health and justice, on agroecology, and on self-government. It is a vision that, little by little, is becoming reality. The other is more petty, short-term, always trying to cozy up to power, and seeks immediate and individual benefits. Those who identify themselves as from the left and from below prefer the Zapatista vision, and want it to be allowed to consolidate itself, more and more, as an alternative and an example. For this to happen, the total repudiation of all aggression against Zapatismo is an urgent necessity.

(*) Specialist in rural issues, PhD from the University of Michigan. Among his books is “Promised Land: Competing Visions of Agrarian Reform”.

For details of the recent murder of a teacher while he was defending a Zapatista school:  http://enlacezapatista.ezln.org.mx/2014/05/10/pain-and-rage/