“The flower of the word will not die. The masked face which today has a name may die, but the word which came from the depth of history and the earth can no longer be cut by the arrogance of the powerful.”
EZLN – Fourth Declaration of the Lacandon Jungle

The Schools For Chiapas (SFC) English language library has been put together to mark the 20th anniversary of the Zapatista uprising. We aim to give students, teachers and researchers an accessible and ordered collection of key Zapatista texts spanning two decades of the rebel group’s public existence. A huge amount of documentation exists in the field and one could fill a large room with the amount of books, papers, dissertations and articles that have been written about and around the movement.  The SFC library concentrates on emphasizing–in our humble opinion– the most important, significant and worthy texts. Considering the magnificent array of works around the movement, our task has been, as such, to separate the wheat from the chaff, and present the reader with a formidable guide to “the word which came from the depth of history.” 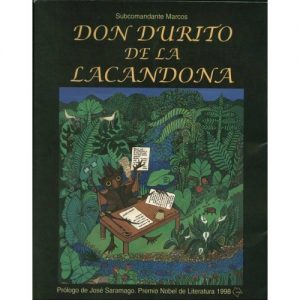 The First Category: ‘Zapatista’, the flower of the word.

The library is divided into two distinct categories – first, the original word of the Zapatistas; and second, other people’s writing on Zapatismo.

The first category — ‘Zapatista’– contains the voice of the movement itself in the form of EZLN communiques, essays by Subcomandante Marcos, speeches given by EZLN, and interviews with indigenous Zapatistas. Since there have been literally hundreds of EZLN communiques and essays emanating from the prolific pen of Marcos, we have chosen what we consider to be the most important documents over the twenty-plus years, including all six Declarations of the Lacandon Jungle. Other outstanding documents include the Women’s Revolutionary Laws, the Thirteenth Steele and of course, La Sexta, or The Sixth, the document that was the blueprint for a new national political movement launched in 2005.

Also included under the ‘Zapatista’ category are documents relating to the San Andres Accords, written with the help of a diverse group of Zapatista advisers and supporters (although ostensibly signed and agreed upon by the government, there was no political will to even begin to implement them – and the partial peace accord recieved an Executive Veto by President Ernesto Zedillo in late 1996). In the Zapatista category we also include the word of Don Samuel Ruiz, not a Zapatista of course, but a giant figure who played a crucial role in the process of liberation for the indigenous people of Chiapas spanning four decades. The most recent addition to the library is a translation by El Kilombo collective of the first textbook of the Little School of Freedom, “La Escuelita”, called Autonomous Resistance. A groundbreaking text, it describes the experiences of the Zapatista support-bases on how they have constructed autonomy in their communities.

This is no ordinary library. Here, the words are alive and the flower of the word–as Marcos so prosaically puts it–will not die, because each prolific EZLN declaration is preceded by months or years of deliberation and consultation on the ground, in turn preceded by months or years of concrete implementation of those ideas. For each speech or interview, the Zapatista is not just speaking of an idea or a wish but of lived experience and the practical application of those ideas in everyday struggle.

​
The Second Category: Archiving a part of the great ocean of words written about the Zapatistas.

The Second category consists of writings on or about the Zapatistas and their accompanying initiatives. This section covers journalistic pieces, magazine articles, academic papers, presentations and addresses at conferences and forums, human rights reports, solidarity bulletins, action alerts, and even individual impressions of people´s personal experiences with the Zapatistas.

An enormous body of work has been produced reporting, analyzing and supporting the Zapatista initiatives. It is said that if one printed out all the words written about the Zapatistas it would span the length of the Wall of China. Twice! In this library, we chose one hundred or so key documents that give a good overall picture of the various facets associated with 20 years of rebel activity. Although most pieces are written with some degree of sympathy for the Zapatistas, there are many different voices and opinions aired, as we prefer to have as wide a range of expression as possible. Nevertheless, the bottom line for all the works is like that of the Zapatista impulse, despite the eclectic collection of writings, an insatiable commitment to justice and for the creation of a better world.

The sheer volume of writings about the Zapatistas reflects the broad array of interest in their ideas. People coming from a variety of perspectives with decidedly different visions, find common cause with the Zapatista project. “A world in which many worlds fit”, as the Zapatistas say. With such an array of perspectives, archiving the articles and papers into manageable categories is a challenge and we have decided upon eight main areas: Education, Ecology, Human rights, Land, Autonomy, Women, Indigenous rights, and Culture. These categories may seem a little reductive, and many of the pieces cross over into several different categories, but for the sake of clarity, we have placed each work into a single main category.

Finally, we would like to make this a collaborative library. We invite all users to make their own suggestions as to what should be included. Please contact Schools for Chiapas if you are interested in contributing to this collection. 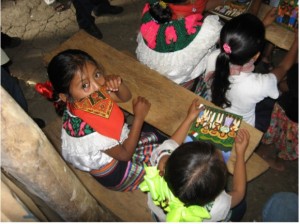 “I have always imagined that Paradise will be a kind of library.”  ― Jorge Luis Borges

Online resources, although easy to access and very useful, are no substitute for real books or real libraries. Nevertheless our hope is that this SFC Online Library will encourage the reader to delve deeper, to get their hands on copies of books, articles and papers, and to dive into the wonderful ocean of literature that has formed around this powerful political initiative.

To finish with a little library story. I was working on a solidarity project in the Zapatista community of Morelia–now the caracol of Morelia–in the early days of 1995. A caravan of activists had come from Mexico City with a school bus and part of their donation, alongside clothes, tools, footware and seeds, was a collection of books. So the compas built a special one-roomed wooden hut to house the collection, with a few roughly hewn planks as bookshelves, and a couple of benches outside for people to sit and read. A lot of adults and children in the communities couldn’t read back then, probably the majority, but nevertheless people liked to hang out there, peruse the books, flicking through the pages and checking out the illustrations and images. One Sunday morning as all the adults were attending mass, I relocated to the little rustic library on the edge of the dusty plaza. As always, I was immediately surrounded by a gaggle of inquisitive little kids. They pulled books off the shelves and wanted to know what this meant or what that book was about, with all the endless curiosity of children.

The kids latched into an illustrated book about ballet–a subject they were not at all familiar with– and somewhat comically, began imitating the teetering Swan Lake poses of Margot Fonteyn. Joy-filled and unfettered, the kids laughed boisterously and maybe our little library had a touch of paradise that morning.

17 years later I returned to Morelia, a very different place now. The rustic library shack was long gone, making way for a very impressive array of mural-decorated structures forming the expansive Zapatista Caracol, appropriately dubbed the Caracol “Whirlwind of Our Words”. Inside the main auditorium, a group of children were seated around tables, reading intently. The quiet, creative hum of children learning, permeated the auditorium.

There is no moral to this story, no punchline, only that now the children are not just acting out the books, but reading them. At the risk of a non sequitur, it is worth pointing out that this is a result of the great advances made by the Zapatistas on the ground in autonomous education.

Maybe there is a moral to the story, maybe that is the punchline: From small libraries can come great things!

Back to the library page here<