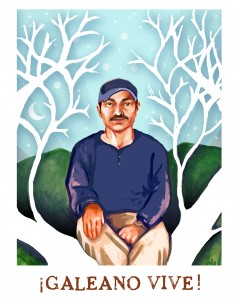 Join us for the creative work of painting a school mural in the Zapatista community of La Realidad from March 29 to April 11, 2015!

Since his ambush and murder on May 2, 2014, the fallen Zapatista teacher Galeano has become a 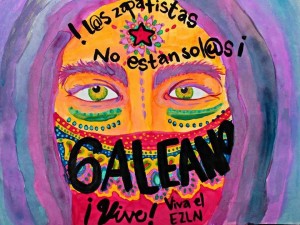 respected and honored, almost iconic, figure in the songs and stories of the Mayan peoples of Chiapas, Mexico; and this spring, his memory will be reborn once again in the bright colors and powerful imagery of Mexican muralism.

Over the last six months teams of indigenous volunteers from throughout this southern Zapatista zone have taken turns painstakingly hand-building a great memorial to Galeano; this two story school and health clinic will replace the buildings destroy by paramilitaries as they prepared to ambush Galeano. This week the finishing touches are being added to this new impressive construction as tiny bits of plaster-like mortar are carefully slapped over every surface creating a smooth, professional finish ready to receive the new mural.  Click here to join the mural painting in Chiapas! 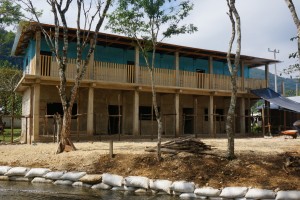 Galeano’s recently rebuilt school and clinic in Zapatista territory in the community of La Realidad will recieve an important mural during April 2014.  Join us to make it happen!

Now the community of La Realidad and the Good Government Board (JBG) have invited Schools for Chiapas / Escuelas para Chiapas to organize a special delegation to retell Galeano’s story on the walls of the new school and health clinic dedicated to his memory. 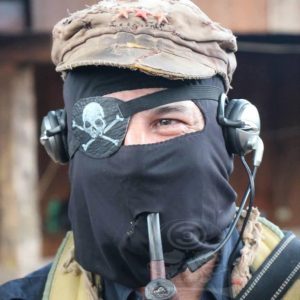 Sup Marcos ceased to exist in 2014 to give life to the Zapatista teacher Galeano.

The slogan made real in practice every day ~ “Galeano: Justice not Revenge” ~ remains a living testament to Galeano’s life and contemporary Zapatismo. Likewise the fact that Sub-commander Insurgent Marcos ceased to exist in order to keep Galeano alive reverberates through these jungles and canyons of the Mexican southeast and will also be painted on the walls of this building.  Most importantly, Galeano’s presence throughout indigenous Mexico has become an unstoppable, living force which makes useless all the violence and destruction this capitalist system delivers to it’s enemies.

At this moment we really need a little help to buy paint and art supplies to paint the mural on Galeano’s school!

We need your help and we need the help of national and international solidarity collectives, organizations, and affinity groups to create this fitting tribute to Galeano.  Please help pass the word because time is short and there’s much work to do ~ share this blog on your friends’ facebook and send out a tweet or two.  Most importantly, think about what you can do to make this vital piece of art a reality in La Realidad.  Click to buy paint! 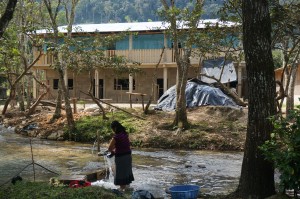 A working collective of artists and assistants must be born quickly ~ two highly skilled and experienced Mexican “MURALISTAS MILITANTES, MITZY VERGARA SANTIAGO Y GUSTAVO CHAVEZ PAVON (GUCHEPE)” are committed to being present for the entire two weeks as our “artists-in-resistance”!  We must also make a large purchase of high-quality paint (approx. 200 litters!) and a mountain of art supplies  – our dream is to leave a fully functional art center at the Compañero Galeano Autonomous Rebellious School.  Finally, we must organize and pay for transport between La Realidad and San Cristobal de las Casas plus food for the caravan..  Alternative media representatives are also needed to travel to La Realidad. 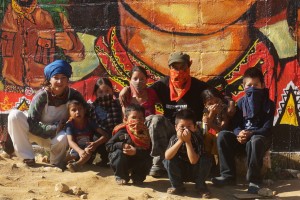 Young Zapatista artists with Mitzi and Gustavo during 2014 mural painting in the northern zone of Roberto Barrios, Chiapas, Mexico.

At home, some of our supporters will might sell a few tamales; others could hold a musical fundraiser that will help us make this big, beautiful project a reality; perhaps you can find it in your heart to help! 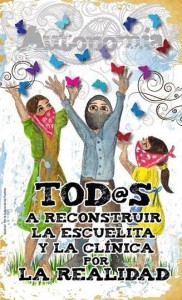 Everyone to reconstruct the school and the clinic in La Realidad.

Traveling participants will meet in the tourist city of San Cristobal de las Casa, Chiapas at 3pm on the first day of Semana Santa (Sunday, March 29, 2015) and continue through the party in La Realidad celebrating on the anniversary of the birth of Emiliano Zapata (Friday, April 10,2015). Volunteers may join for the first and second week; for only the first week; or for only the second week. No matter what your art skills are, our “artists in resistance” Gustavo and Mitzy will find important contributions for you to add to the mural.  Click here to join this amazing adventure! 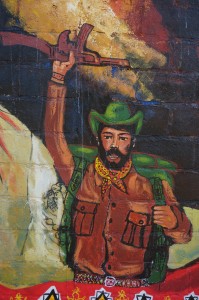 This painting of Sub-commander Pedro was painted under the direction of Mitzi and Gustavo in 2014; the health clinic in La Realidad will be named “The Autonomous Zapatista Health Clinic of Subcommander Pedro. We believe this image will be reborn anew during the Easter 2015 painting. 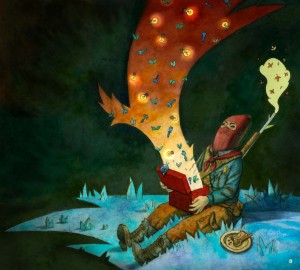 Who knows what might happen when you open a box full of justice, dignity, and democracy . . . and then let it grow and mature for 30 years? 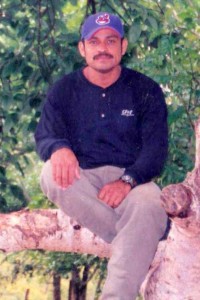 Galeano worked selflessly his entire adult life to make the world a more justice and democratic place where indigenous people are respected. 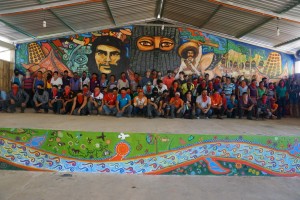 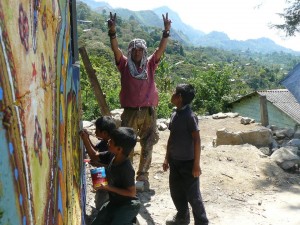 “Artist in resistance”, Guchepe, painting a mural in Zapatista territory with  kids who always are included in these mural projects.