The Indigenous Rights law approved by Mexican Congress in 2001, drafted by lawyers to protect landowners, is a mockery to Mexico’s indigenous peoples and will not settle the country’s historical debt to its roots.

Renowned linguist and writer Noam Chomsky has been a long-standing supporter of the Zapatistas and the indigenous struggle in Chiapas. Here is a piece he wrote in 1999, outlining the impact of the Zapatistas uprising on the passage of NAFTA, the North American Free Trade Agreement.

A Place Called Chiapas is a 1998 Canadian documentary film of first-hand accounts of the Ejército Zapatista de Liberación Nacional (EZLN) and the lives of its soldiers and the people for whom they fight. Director Nettie Wild takes the viewer to rebel territory in the southwestern Mexican state of Chiapas, where the EZLN live and […]

The community is the most concrete and general expression of the indigenous peoples. Yet what legal and constitutional recognition is there for the rights of the community? Adelfo Regino of the Mexican National Indigenous Congress outlines the demands of the indigenous in light of the San Andres accords between government and the Zapatistas. 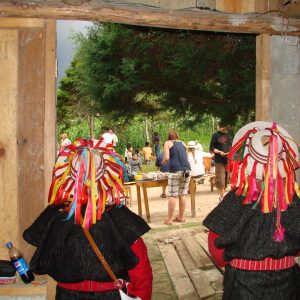 The San Andrés Accords are agreements reached between the Zapatista Army of National Liberation and the Mexican government, at that time headed by President Ernesto Zedillo. The accords were signed on February 16, 1996, in San Andrés Larráinzar, Chiapas, and granted autonomy, recognition, and rights to the indigenous population of Mexico. They were discussed and […]