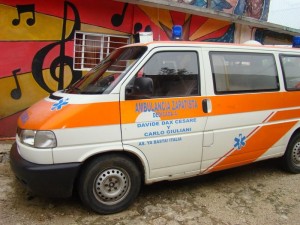 The Zapatista project is defined by the demand for autonomy and it is important to have a clear understanding of the term. A recent blog post here is a case in point: A Schools for Chiapas Mural Delegation had the wonderful experience of the community preparing a lavish banquet for them, despite the indigenous families precarious economic situation. Overwhelmed with gratitude for the gesture, the Schools For Chiapas folks thanked their Zapatista hosts, who replied humbly: “This is what our organization means by autonomy.”

Peter Brown continues in the blog post, “So our feast was actually a lesson […] Yes, Zapatista autonomy means producing most of what one consumes while growing strong, healthy children and communities; but Zapatista autonomy also means that these small farming families are neither beholding to local political bosses, nor dependent on networks of corporate food production or international banking systems. And, yes, Zapatista autonomy means having the audacity and reflective strength to mobilize people-of-conscience around the world to build networks – and to forge new paths of resistance – with the absurd goal of collectively healing the holes in the ozone layer and the holes in our hearts.”

So how do we define this audacious thing called autonomy?

A good place to start is with the original meaning of the word: Autonomous (αὐτονομία) is an Ancient Greek word coming from auto- or “self” and nomos, “law”, hence when combined understood to mean “one who gives oneself one’s own law”

Building on that basic formal understanding, the standard dictionary definition is useful:

1. independence or freedom, as of the will or one’s actions: the autonomy of the individual.

However, as we have seen above, the Zapatista use and understanding of the term is more nuanced:

“Autonomy is the right to organize and govern ourselves in our indigenous cultures,” explains an indigenous Zapatista during an interview a few years ago. This way of defining the term coincides with the dictionary explanation above, but then he develops the idea in this manner: “For us, autonomy means re-establishing and restoring the culture of self-determination that has been taken away from us as indigenous peoples over the last 500 years. That is, in terms of territory, that as people who live in a region, we get to administer our own economy, our own politics, our own culture and our own resources.”

So we can understand from this that Zapatista autonomy is, in theory, self-government, freedom for the communities, and respect for their traditions.

And in practice, autonomy is territorial power and a form of radical grass-roots and participatory democracy.

We also understand that the Zapatista concept of autonomy is not about separating from the Mexican state. The Zapatistas are not a separatist movement; they do not want their own state like, for example, the small separatist movements in Texas or Vermont, or the desire of the Basque people in the Spanish state. Instead, the Zapatistas are clear that autonomy for them is not about separation but respecting traditions and customs (usos y costumbres) with power being exercised on a community level, as the community sees fit.

Thus, Autonomy is understood as bringing people together, not separating them: building a world in which all worlds have a place, as the Zapatistas say.

A Challenge to the State

The EZLN Autonomous Municipalities declare- Here we are, we are the true representatives of the people, we declare we are autonomous from the corrupt government and demonstrate that we have the right to govern ourselves. And in doing so, they are challenging the power structures of the state government. They are refusing to recognize the authority of the state or participate in the sham of so-called “democratic” elections.

In challenging the authority of the state, the Zapatistas have suffered military and state repression. The army has violently entered the villages, closed down autonomous municipal headquarters, and beaten and arrested hundreds of people. But the more the state represses, the more the people resist and demand their autonomy. They actively reject any presence of the mal gobierno (bad government) in their territory, including rejecting–in principle–any form of state financial assistance or development programs. Nevertheless, the Zapatistas are self-proclaimed patriotic Mexicans, and they say their struggle is a national project that aspires for a better Mexico, and not simply for their own autonomous enclave.

To recover and regenerate peoples’ power, grass-roots groups seek autonomy from the state so that local spaces may exert and govern themselves in their own cultural terms. Radically challenging the ‘Global Project’, they seek to subvert the foundations of modern power structures.

How do the Autonomous Municipalities function?

But how does autonomy function in practice in the Zapatista rebel zone? Grass-roots lawyers from the human rights organization Enlace Civil, based in Chiapas, give an excellent overview:

The autonomous municipalities, parallel to the constitutional ones, do not receive any financing from the state, nor do they collect taxes.

The activities and the responsibilities of each autonomous municipality are dependent on the will of their members, and on their level of consolidation. They do not manage public resources, and their budget, if it exists at all, is very limited, and due to the cooperation of some of their members. Those who hold a position on the Municipal Council do not receive a salary for it, although their expenses should be paid by the same communities who request their presence, through cooperation among the members. In some cases, members of the Council are supported in their farm work, so that they can dedicate themselves to their [Council] work, and not have to go the fields.

The autonomous municipalities resolve local problems of coexistence, relations and exchanges between communities, and they attend to minor crimes. The application of justice is based on customary law. For example, in cases of common crimes, the punishment imposed by the Autonomous Council is reparation of the damages: instead of punishment by jail or fines, a sentence is imposed of working for the community, or for the aggrieved family.” 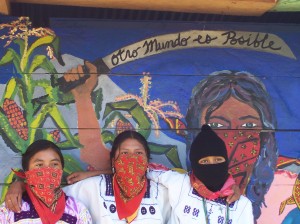 Professor Marissa Forbis, a Chiapas veteran, explains the current arrangement in the Zapatista caracoles in more detail during a recent interview:

“The Zapatistas have divided their territory into five regions which they call Caracoles. Within each Caracol there are several autonomous municipalities (the number varies). Each municipality is governed by a council made up of community members nominated to serve for two or three years. Each of the Caracoles has a Junta de Buen Gobierno. These councils are comprised of a rotating group of members who come from all of the autonomous municipalities that correspond to a particular Caracol. There is no standard way that these representatives are chosen – the autonomy is indeed autonomous – but frequently they are people who have served as community authorities, proven themselves, and then been selected to serve at a higher level. There can be a combination of the community naming someone at an assembly, or someone also desiring to serve and making that known. The number of days this group serves on the Junta varies depending on the Caracol. In some they serve 10, in some 14 days. They deal with ongoing and new matters brought before them. When they leave, a new group arrives.

Municipal representatives serve as a feedback link between communities and the Junta de Bien Gobierno. For example, in the municipality of 17 de Noviembre, located in the Caracol corresponding to the Morelia region, each community sends men and women as representatives to a municipal assembly. Sometimes issues discussed at the assembly need to be brought forward to the Junta. Or an issue may be sent to the assembly by the Junta who wants the communities to discuss it and report back. Autonomous governance begins at the community level, moving to the municipality level, then to the Caracol with the Juntas. Decision-making flows back and forth on decisions that are of a movement-level nature or of regional importance.

So, there is a lot of consensus decision-making and a lot of consultation with the communities before decisions are taken. Many people from outside would be frustrated because things would seem to move so slowly and you couldn’t get a decision quickly. But, it is because there’s this process of bringing things back to the communities to hear what people have to say, what their ideas are, then bringing it back to an assembly to discuss all of that. Community members who serve in the autonomous governing structures are unpaid, and they rotate frequently so that governance is really a matter of grassroots participation.”

The autonomous project is proving to be a huge success in the rural communities of Chiapas. A report by the non-governmental international organization, Sipaz, concludes with the following recommendation on the autonomous municipalities:

“Considered from a western political perspective, the autonomous municipalities make no sense. They have no resources or real power or legal legitimacy, and they are dying, encircled by hunger, diseases, the paramilitary threat and the security forces. However, for the indigenous peoples, they constitute an eloquent symbol of a culture which is resisting and defying the dominant culture, making a reality of a different way of understanding politics and of organizing the economy, society, and even human relations.”

But let us leave it to the Zapatistas themselves to explain (from “El Navegante” and archived in Schools for Chiapas Library):

“If we are talking autonomy we should have everything we need. We should have our own territory, our own education, administer our own resources. Self-government consists of (first of all) doing away with the so-called “democracy” that the government has, that is; always through a “dedazo” (their [finger pointing] selection) are the municipal presidents, the legislatures, the governor and all the authorities chosen. In the communities we should have our own government.

Further reading on Autonomy in the Schools for Chiapas Library:

Gloria Muñoz Ramírez – We Won’t Back Down on Autonomy, declare Zapatista Bases