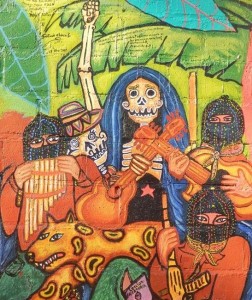 Musical band of those who have crossed to the other side in the Zapatista educational and production center of Jolja. Painted 2014.

When I came to the Museum of Memory and Tolerance … [Plaza Juárez, Mexico City], I read a sign printed in black letters on a wall:

“I do not fear repression, I fear the silence of my people.”

The words immediately sent me to the 43 Normal School students and made me think about,

What is it to being a teacher? Is it just about teaching reading and writing?

Schools [teachers colleges] provide teachers for the most remote and difficult places in the country, where politicians show up only at election time. For a child, an adolescent, to be part of a school is to make ​​friendships and develop a sense of belonging. We all seek to belong to a community. We all seek the benefit of a friend. Companionship and respect for others originate in the school. 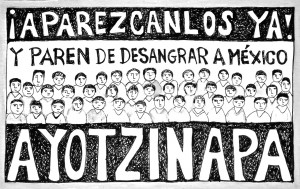 In forgotten places like the communities of the Alta Montaña [High Mountain] region of Guerrero, the teacher is much more than a transmitter of knowledge. The teacher is a moral authority, a justice of the peace, a midwife practitioner, a steward, a confessor, a marriage counselor and the mailman of the hearts of lovers and, in many cases, the father and mother of the child with bulging belly [malnutrition] that looks at him like a savior: the solution to all his problems.

Rural teachers, far away from union and political scuffles, learn to live with the people, to respect their customs and, in many cases, to despair at not being able to do more for the children and young people who come daily to their classrooms. It’s what happened to Lucio Cabañas and Genaro Vásquez Rojas who, faced with governmental indifference, ultimately lost hope and became guerrillas. It happened to the teacher in the tale told by Juan Rulfo:

“Luvina, who (being weaker) chose alcohol to alleviate her exasperation.” 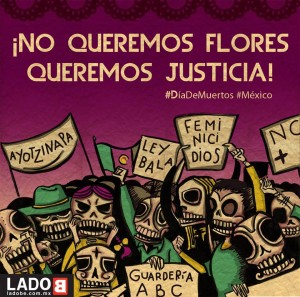 Perhaps the aspiring teachers who enter the Normal School are unaware that nothing about their task is easy, because the one who teaches to read and write reproduces one of Christ’s miracles: opening the eyes of the blind and conveying hope for a better future. The teachers in our country, those who put up with mountain dust and eat tortillas and salt with their students, are not just daring young people, but rays of hope amid the dark night that is swooping down upon Mexico.

Today, in this extraordinary Museum of Memory and Tolerance, it is good to reflect on the 43 disappeared Normal School students who must show up. We don’t like everyone. Many put up with … the conceited ones, the misses of beauty pageants, the reality shows that encourage idiocy, the mental retardation of the telenovelas [soap operas] shown throughout the entire continent, the staging by the Attorney General’s office, justice with blindfolded eyes and crooked scales.

What we are no longer able to tolerate is impunity, the mockery of the 43 who have vanished, the greed and the enrichment of public officials. This museum is exemplary and forces us Mexicans to remember. It is also one of the few in Latin American that practices impartiality. I will always remember the one hundred and one female figures that made up the exhibit titled Exodus by Helen Escobedo. Sculpted ​​with sticks and white rags, the sculptures trudged laboriously one after another on the Plaza Juárez, and they remind us still today of what it means not to have a country.

The Museum of Memory and Tolerance made an altar of the dead with a circle of marigolds accompanying one of my writings: 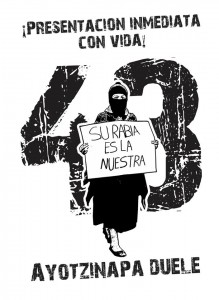 “I want a country where there are no murders, where everyone has the same opportunities. We cannot go on like this, seated atop bones, above unmarked graves.

“We have a common cause, the cause of the love we have for the country and for ourselves, and the care we have for those who come after us, not just our own children but for all the children in the world.

“What are we leaving them? What are we going to say when they ask us, ‘and you, what were you doing‘?”

Translated by Jane Brundage (Thanks to the Dorset Solidarity Committee)